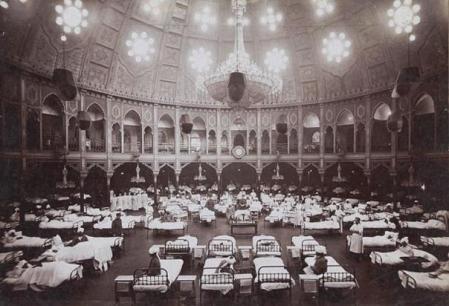 The ‘bombs and bandage’s lesson was designed to introduce students to impact of war on the body in the 19th and 20th century.  This lesson allowed students to expand their own knowledge of soldier’s experiences in war and explore how medical care and disease prevention has played a crucial role in modern military history.  For every version of this lesson historical expertise in the classroom was provided by Dr Emma Newlands and PhD Candidate Simon Walker, both of whom are specialist in military medicine in the 20th century.

Military Medicine was written and designed by Dr Emma Newlands and Simon Walker.  Dr Newlands is a specialist in the physical experience of soldiers and their bodies during the Second World War at the University of Strathclyde.  Simon Walker has similar expertise in the First World War.  The lesson was written to introduce new narratives and concepts such as ‘triage, wounds and ballistics’ and used a primary source medical triage exercise as a way to help the pupils engage with these new concepts.

The lesson was equally divided between presentation style teaching, group work and a class discussion using worksheets (attached to this article). This was designed to include the pupils as much as possible, through direct group work, question and answer / fill in the blanks sessions and summary sections.

Two exercises with various worksheets were useful for this section:

This reflective account was co-authored by Dr Emma Newlands and Simon Walker.

This was an extremely interesting and fun lesson to give to the pupils as it built on the knowledge that they already had developed through the school curriculum and encouraged them to confidently share their opinions and ask questions.

As the pupils were being introduced to the topic of death and debilitation during the First and Second World War, it was important to be sensitive of the subject matter and not to delve too deeply into the more grotesque aspects of the topic.  However, generally, a lot of interest was focused on the ways that soldier’s bodies were damaged and repaired as pupils asked questions about the difference between gas, bullets, bombs and bayonet wounds and their impact on the body long term.

Dr Newlands and Mr Walker agree that this lesson was designed to be accessible and interesting without being dumbed down or overlooking important facts.  Students were constantly offered the chance to ask and answer questions as well as to engage with the topic direct by assuming the role of the historical figures they were learning about.  To hold their interest a PowerPoint presentation was used, but this applied sparingly alongside a series of short teaching narratives that lasted no longer than 4 minutes before involving the pupils in some way.

Dr Newlands has been continually impressed with the students as they enthusiastically engaged and thought of questions and responses outside of what had been foreseen during the development of the lesson.  This was a rewarding experience as not only did students attain new knowledge but continued to ask about the topic to their teacher and at other lessons later in the program, showing their overall enthusiasm and a keen grasp of the topic.

This topic was chosen as military health and medicine is a dominant theme within the history department at the University of Strathclyde and indeed more widely in relation to servicemen and women’s deployment and service around the world today.  The pupils were evidently aware of the role of soldiers and what was expected of them and it is hoped that this lesson will further enlighten them towards the experiences of soldiers in history and also the significant evolution of medical military technology that has occurred over the last century.

With reflection, improvement to this lesson could be focused on the second exercise sheet as some of the sources are too dense for the pupils to work through in the allotted time given.  Future versions of this lesson aim to introduce a more varied array of sources, as this is a useful exercise especially when utilised with 1-2-1 engagement with the pupils within their smaller groups.

Overall, this was an excellent lesson which attempted to combine complex historical ideas with a topic with much contemporary relevance.

Please feel free to access the attached resources for this lesson.  All of the images and information is strictly provided for a non-commercial / education purposes.