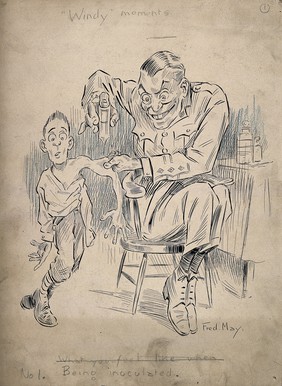 A large and evil looking army physician eagerly inoculates a fearful young man, pen and ink drawing by F. May

Within this section, there are links, information and resources related to the research, teaching and publications from academics at the University of Strathclyde on the topic of the Epidemiology, Disease, and Infection Control.  Many of these resources provide the background for the core lessons for the school engagement project.

Simon Walker on the History of Inoculation: Simon has long had a passion for inoculation history.  His MSc research was focused on the introduction of Anti-typhoid inoculation during the First World War and how this impacted on soldiers autonomy over their own bodies.  He also carried out the research and wrote the web text for the NLS’s focus on smallpox vaccination within British India in the 19th century.  As Co-Ordinator for the school engagement project, Simon has written and edited many of the lessons along with Dr Newlands and has consistently taught each topic along with specialists from the University of Strathclyde.

The Old Closes and Streets of Glasgow – Thomas Annan: In 1868 local printed and photographer Thomas Annan was commissioned by The City of Glasgow Improvement Trust to take pictures of some of the slum areas prior to demolition. This is claimed to be one of the first times photography was used as documentary evidence and his striking images illustrate Glasgow for the poorest classes as it was in incredible detail!

The Victorian Achievement: BBC website on health in 19th century Glasgow: Website explaining the effect of industrialisation and urbanisation on health in Glasgow during the Victorian period. It highlights the cholera epidemics of 1832 and 1848 and the rise of public health as a response to the problem of disease.

Smallpox and the development of vaccination: (Digitised) Collection for Medical History of British India, National Library of Scotland, researched and edited by project co-ordinator Simon Walker.

Glasgow City Heritage Trust – Glasgow Health: In 2017 Glasgow City Heritage Trust ran a series of lectures and engagement events focused on the health of Glasgow over the last 200 years.  One of these events included talks from colleagues from the University of Strathclyde and the Glasgow School of Art.  Follow the link to find out more about this engagement project and a host of historical resources.

Oxfam Video: Cholera programme in Haiti: Oxfam Public Health staff in Artibonite talk about their work in the cholera programme; in particular teaching families how to use aquatabs so that they are protected against the disease and their role in checking that people are using enough.

Video: Combatting Cholera in Zimbabwe: Doctors Without Borders video on the cholera epidemic in Zimbabwe in 2009

Doctors without Borders information on work in Malawi: Information on the Malawi Cholera outbreak in 2009 and the efforts made to both treat patients and prevent further cases.

This is Zimbabwe: Films showing underlying causes of Cholera: 2009 video footage showing living conditions and water supply in Zimbabwe and its effects upon health, particularly the occurrence of cholera.

Map of Cholera in Haiti: A map showing recent cholera outbreaks in Haiti.

Exhibition | Vaccination: Fame, Fear and Controversy, 1798-1998: This is a travelling exhibition that was displayed at the Osler Library of the History of Medicine in 2017. It is presented in partnership with the McGill University Faculty of Medicine and the Freie Universität, Berlin and is curated by Cynthia Tang and Rob Boddice.

Follow Journeys Through Health History on WordPress.com
Join 53 other subscribers